THIS PAGE will be used for additional information - not necessarily related to cemeteries - but probably pertinent to genealogy or family history.

NOW POSTED:  An alphabetical listing of more than two thousand military veterans in the cemeteries listed here. Click on the link "Military Veterans" at the top of the page. 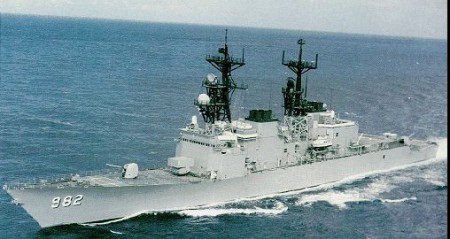 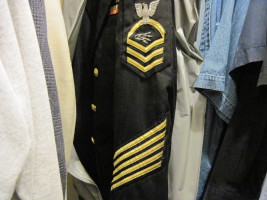 The ship shown above was USS Nicholson (DD982), and at the time of the photograph was one of the most modern warships in the world - a gas turbine (Jet engine) powered ship of the SPRUANCE class of Destroyers. I retired onboard this ship in 1983 in Charleston, SC; the Nick was decommissioned and sunk to form an artificial reef after her usefulness to the fleet was over.

Most Americans have at least a passing familiarity with military rank - that is, Army, Air Force, and Marine Corps rank, officer and enlisted. Fewer people understand the Sea Service (Navy and Coast Guard) enlisted structure.
Navy and Coast Guard enlisted personnel do not have "Rank" as does the other services (Corporal, Sargeant, Master Sargeant, etc.) Rather, the two Sea Services use a system of Rate and Rating to identify the grades of their enlisted people.  Navy enlisted personnel are divided into 3 distinct segments of 3 paygrades each. Paygrades E-1 through E3 are called "Non-rated" paygrades, and are loosely equivalent to apprenticeship status in civilian industries. A non-rated sailor may have a rating but is not "rated" until he attains petty officer status.  Paygrades E4, E5, and E6 are Petty Officers 3rd, 2nd, and 1st Class and would be considered Journeymen and supervisors of those of lesser paygrades. The top 3 paygrades, E-7, E-8, and E-9, are Chief, Senior Chief, and Master Chief Petty Officers, equivalent to civilian Master Technicians. Non-rated personnel do not have to have a Rating (occupational specialty) but may have as a result of completing a service school or completing "on-the-job" requirements. However, no Sailor can be "Rated" (Petty Officer (NCO) status) without having a formal Rating, as promotion is within a rating and specific to that rating.

A sailor's Rate is his paygrade, and is equivalent in description to Army, Air Force, and Marine Corps Enlisted Ranks. A Sailor's  Rating is his professional specialty.  The two combined comprise his official designation. For example: the uniform pictured above was the dress blue uniform I wore at the time I retired from service. The eagle pictured appears on all Navy enlisted uniforms for Petty Officer Third Class and above; the lightning bolts insignia indicated my rating (occupational specialty) of Radioman. (that rating has been merged with another to form the rating of Information Technology specialist) The 3 chevrons with a "rocker" indicates my rate, or paygrade (Chief Petty Officer, pay grade E-7). The 5 slanted stripes below are called "hashmarks"; each stripe represents 4 years of service. Thus, 5 stripes mean that I served at least 20 years, but less than 24. The chevrons and hashmarks can be either red or gold; gold indicates at least 12 years of honorable service (at least 3 good conduct awards) All Petty Officers, Third Class, Second Class, and First Class, are addressed informally as "Petty Officer _____".
Since Navy Ratings change occasionally due to needs of the service and advances in technology  I will not attempt to describe them all here. However, as I transcribe cemeteries from the information available on headstones and military markers, I will attempt to explain the various ratings mentioned.
If someone is interested in learning more about Navy Ocupational opportunities, I recommend a visit to the appropriate Website at:

http://www.navy.com/navy/careers/
I enjoyed my 22 years Naval service, and while I would go back and change some details if I could, I would not trade my memories of those years for anything.  Where else could you visit Guam, the Philippines, Japan, Hong Kong, Spain, France, Germany, Italy, Sicily, and perhaps some places I can't remember (or mention); serve on a Minesweeper and 2 destroyers, spend 3 years in Hawaii, 3 in Bermuda, 3 in Washington DC and 3 in NYC, and get paid to do it?  And (in my case) meet a really nice girl, get married, take her and the newborn to Hawaii, where a daughter was born?  ﻿Where, indeed!  Go Navy....