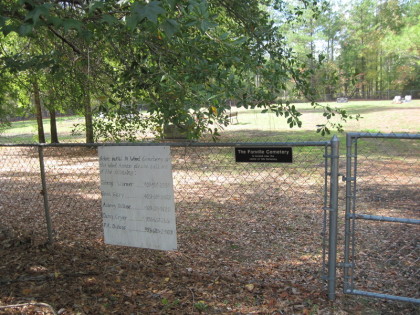 FONVILLE AND WOOD ANNEX Cemeteries are located together very near to the Wood Cemetery, and is associated with that cemetery. The Fonville portion of this cemetery, located in the center of the location, is enclosed in new metal fenceposts but no
fence, and has been completely restored, with new headstones and a Texas Historical Marker.  The Wood Annex surrounds this central area, and contains 5 burials
DIRECTIONS:  From Pineland on US96 at the caution light, go west on FM83,  7.1 miles; turn left on CR432 and go about half a mile. The cemetery is up a short driveway on the right; there is a sign for the turnoff.  Wood Cemetery is about half a mile further on CR432, on the right.
This cemetery was photographed and recorded  November 25, 2011.

FONVILLE CEMETERY:  Richard and Thursa Fonville sold their land in MS (awarded to Richard for service in the Indian Wars of 1836-38) in 1857 and moved with their 7 children to Texas, where 5 more children were born. Their daughter Eugenia married into the WOOD family and, after the death of her husband, married into the nearby LOGGINS family, where significant Cherokee blood was already present. (Eugenia is buried in the Chinquapin Cemetery, originally known as the "Loggins Family Burial Ground", next to her second husband Argyle Guy Loggins)
The ROBBINS's buried here were family friends who followed the Fonvilles from Mississippi, and farmed a portion of Richard's 422 acres.