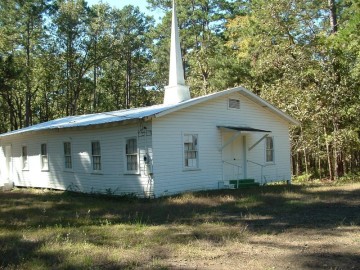 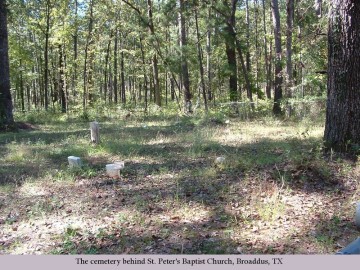 ST. PETER'S BAPTIST CHURCH CEMETERY is an African American cemetery located just outside Broaddus, in San Augustine County, Texas. The cemetery is located behind the church, which is inactive; both appear to be some-what neglected.  The cemetery was visited, photographed, and transcribed on October 19, 2009, by Bob Britnell.
(misterbob@suddenlink.net)  Pictures of the church, cemetery, and all markers are available if requested.
DIRECTIONS:  on SR147 just north of Broaddus near the school, turn west on FM1277.  The church and cemetery are on the left just around the corner.  You can also get to the location from SR103 by turning south on SR147 or FM1277.
Twelve of the sixteen identifiable graves are marked with metal funeral home markers, and there are at least two graves with no marker.