MILLER CEMETERY, San Augustine County, Texas; photographed November 5, 2008.
DIRECTIONS:  From the intersection of US 96 and SR 147 south of San Augustine, go right (south) on 147 3 miles; cross Venado Creek and go right on CR 332; there is a highway sign for Miller Cemetery. Go 1.6 miles on this road and turn left at the sign for Miller Cemetery; this is a very narrow, primitive dirt road leading to private property. Go one-tenth of a mile to the gate and park on the right; there is a sign on a tree in the woods on the left. The cemetery is in the woods behind that sign. There is no road, no cleared trails - just thick woods.  This cemetery has been abandoned for a long time. There are no discernible boundaries, and I found only two identifiable headstones, transcribed below. There were two concrete-lined crypts broken open with no coffins or human remains visible inside, which may have been removed and buried in the ground. Judging  from the proximity of the two concrete markers to the crypts, they may mark the locations of the re-buried remains.
The crypts appear to be more than 100 years old. There was a large and a small cast-iron marker leaning against one of the crypts but no lettering was visible through the rust; it is quite possible that these old markers are the original headstones for the crypts.  A search of the surrounding woods revealed more than a dozen depressions in the ground that are unmistakeably graves. The federal censuses for 1850-60-70-80 show Leroy and "Tryphyna" as white farmers; the 1860 slave schedule lists 40 slaves in the household, ranging in age from 50 to 2 years; many of them children. These slaves lived in 5 slave houses.
Leroy Miller and Tryphenia Crawford were married Oct 18, 1838, in Texas. Children listed in the 1860 census were: Theophilus, (born about 1840); Sam, about 1846; Jacob, about 1852; Leroy Jr., about 1855; James, about 1848.

The following note was posted on a family tree site: "Theo Miller was killed during the Civil War, most likely at the Battle of Pea Ridge. Sim Mathews carried his watch and personal belongings through the war to return them to his cousin Tory, Theo's wife." (He was married to Victoria "Tory" Adelaide Mathews; they had a son, Theophilus Jr, born in 1861.)  Theophilus died in Little Rock, Pulaski County, Arkansas while serving in Co. C, 27th Regiment, Texas Cavalry (known as "Whitfield's Legion")

UPDATE: Mr. Paul Ridenour visited this cemetery and found 4 additional headstones, ancestors of his wife. He kindly shared the pictures with me, and I have transcribed them below with the information he provided. The name "Doyens" on the headstones should be spelled "Doyen". 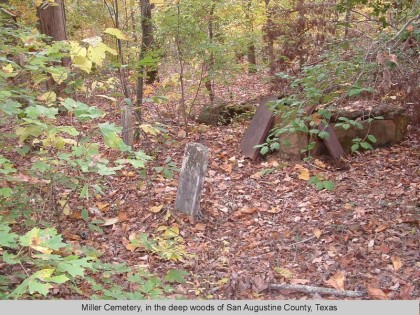 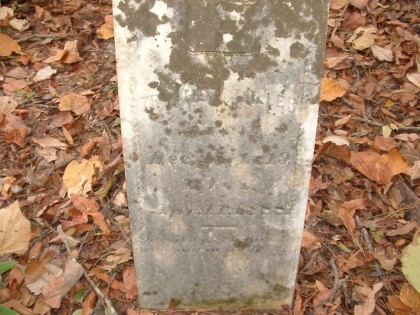