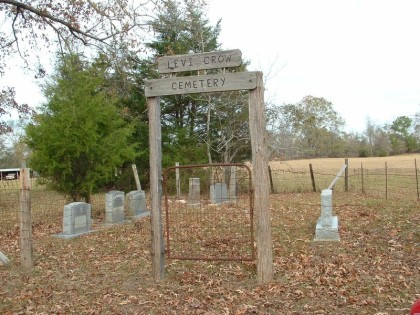 LEVI CROW CEMETERY, San Augustine County, Texas; surveyed and photographed December 8, 2008.  This is a very small family cemetery, located on private property alongside a county road.  The only residence on the road is next to the cemetery; the resident is the farmer who owns the property. He had no objections to visitors to the
cemetery. DIRECTIONS:  from the intersection of SR 103 and FM road 705, go south 2.5 miles to the sign for "Pisgah Cemetery" and "Levi Crow Cemetery"; turn left on CR313. Half a mile down the road you will pass Pisgah Cemetery; keep going another mile until the road curves left to go to the farmhouse and a smaller road goes straight.
The cemetery is on the left just past this junction, on the smaller road. CAUTION:  Don't try to visit this cemetery after heavy rainfall; the creek floods the road and makes it impassable.