DIRECTIONS:  from the Elementary School on the corner where SR147 turns left from SR21, go north on 147 about a mile; the cemetery is on the left, behind the Texas Historical Commission marker. There are about 20 graves in the cemetery, but only 10 have markers.  The website "Find-a-Grave" has additional names for this cemetery, at

The following information is quoted from the historical marker:  "Pioneer, Soldier, Civic Leader, and State Legislator, Alexander Horton (1810-1894) came to Texas in 1824. He served as an Aide-de-Camp to Gen. Sam Houston at the Battle of San Jacinto, April 21, 1836. This cemetery is situated on property Horton bought in 1837. His home once
stood adjacent to the plot. According to family tradition, the first grave here was that of Horton's brother William Wade, a Texas Ranger who died in 1849...."
The names are listed in order of burial, starting with Alexander and his wife in the far left corner. In addition to the names listed here, there is one unmarked concrete sarcophagus, almost buried by weeds and dirt, in the middle of the cemetery. 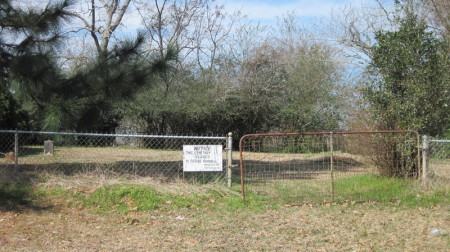